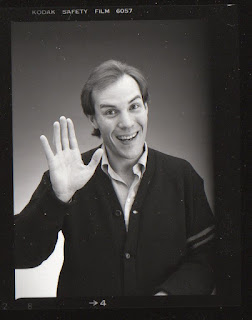 Can you tell me more about yourself ? When did you decide to become an actor, and what was your formation ? What were your works previous to Rent-a-friend ?

I always wanted to be a star in some kind of show business endeavor. First it was wanting to be a rock star, to be chased down the street by screaming girls, you know, like the Beatles.  Later I enjoyed comedy stars on TV: Johnny Carson, Dean Martin. I thought it would be cool to host my own talk show. In high school I lead a loosely organized group of kids to create comedy sketches and performance pieces, both on stage and wherever we wanted to spring them.  In the hall ways, cafeteria, wherever.  This was early, before Saturday Night Live. We called ourselves "The Help Mes".


Before RAF I had done stand up comedy, improv comedy and fronted a rock and roll band that did comedy too. We were called The Dogmatics. I didn't do much "acting" though I did appear in a play or two and in commercials.


I saw that you made a show called Wild Chicago in 1988, can you tell me more about it ? How did you come to create and host it ? Did you work on other shows after that ?

Here's more from my campaign on Indigogo to make a DVD of Wild Chicago stuff :

I’m betting many of you already know about this trailblazing series that debuted on a cold Friday night at 10:30, January 6, 1989,  WTTW, Channel 11.  I hope you’ll write about the show’s impact on you in the comments below.

For those of you who aren’t familiar, Wild Chicago, was a half-hour journey into the “urban jungle“, away from Michigan Avenue, away from Lincoln Park, away from the Gold Coast…and into the natural habitat of this city’s vibrant, sometimes dicey neighborhoods, where I showed you surprising people, places and things you might want to check out for yourself.  (If you were brave enough, in some cases!)

Wild Chicago celebrated a city that was authentic, funny and utterly real.  We loved giving TV time to people who otherwise would never have appeared on the air.  We took you to their quirky basement museums and crazy, chaotic stores.  We let them demonstrate their unique exercise regimens in their shag-carpeted living rooms.  We toured their used auto part junkyards.  We let them express their mad passion for what they did – and you loved it!

Wild Chicago won dozens of Emmys. Critics raved.  Ratings grew week by week.  It touched a nerve (funny bone?) and fans told us the show captured for them something raw, something true about the city unlike anything else they’d seen on TV.  And it made them laugh their asses off.

I did other shows after WC. Ben Loves Chicago and Ben Around Town.  Same kind of idea, running around town showing you cool stuff. I returned to WTTW in 2006 to host and produce a show called Wild Chicago's Illinois Road Trip where we bopped around The Land of Lincoln showing you more interesting and odd places and people.

WC came out of RAF actually.  I was trying to get a job in LA as an advertising copy writer and in my presentation I always showed a clip from Rent a Friend, just to illustrate how creative I could be.  Nothing came of my efforts but I did have a meeting with a VP of Production at Paramount Pictures, Bill Horberg, who said I should show RAF to a friend of his, John Davies.  But Davies was not in LA, he was in Chicago, at WTTW.  So I went back to Chicago, showed him RAF and he said he liked what he saw of my on-camera skills, and asked if I'd be interested in doing a show together.  I dropped the FA plan like a hot potato and jumped on this new opportunity.  This was in July of 1987.  We worked together, making demos and pilots and finally got a deal to make 13 shows. We premiered WC on January 6, 1989.

I've been awarded 8 Emmy Awards for my efforts, thank you, God!


How did you get the idea for Rent-a-friend ?

I was working as the creative director of a company that made business videos. We called them "industrials."  My boss, Charles Harper, suggested we go to lunch and brainstorm about how to use some remaining money in our accounts to produce a video that would demonstrate our capabilities of thinking "outside the box."  I suggested we do a video where there's a guy who just sits there and asks you about yourself and tells you about himself and shows pictures of his family and all.  I could play the guy.  We could call it "Rent a Friend."  Charles loved the idea and bang, just like that, he said let's do it!  The idea may have come because I had been researching the home video market and seeing all the different topics people were making videos on.  This was in late 1986.  The idea just floated into my head, really.  So I know it came from The Muse.


Can you tell me more about the shooting of the video ? Was it done in one take, or did you try several times ?

The video was shot in one take.  Forty two minutes.  We did run through it 4 times and then chose the best take.  We added a few cutaways in editing. We were insistent about this:  No extensive cutting or taking scenes from other takes and putting them together.  The audience never would have known, of course, or cared, but we were young and idealistic.  We wanted that purity of one continuous take.  I think we made the right decision.


Did you shoot the video first and then found a distributor, or was it the other way around ?

There was no plan for distribution, really.  That's where we failed.  Because we did pay a publicist to promote it and get press.  Once the press started picking up on it, we were deluged with requests.  But other than a 1-800 phone number (which news stories would not publish) the public had no way of knowing how to get a copy.   And we were on CNN, People Magazine, Rolling Stone, The Enquirer, Oprah, everywhere!  Today you can get it via the Found Footage Festival.


How much of the video was improvised ? I guess it must have been difficult for you to interact with someone who wasn't really there ; did you train in any way before shooting the video ?

I had an outline for the taping and I rehearsed with a camera prior to the shoot.  But there was no script.  I was drawing from my own life so I knew the material. Was it difficult to interact with someone who wasn't really there?  Not at all.  I discovered I have a natural gift for speaking to the camera.  I also felt like I was truly connecting with someone, truly interested in whomever was watching.  It was very fulfilling to do, to tell my story in that way.  I also hired a very talented coach, Steven Ivcich, who had been an acting teacher of mine.  He helped me a lot.

When you show us a video-tape of your cat and you interact with him, it looks like a "mise en abyme" of what you're trying to do with the audience, was is intentional ?

I wasn't consciously employing "mise en abyme" but I was surely toying with the medium. Same way with the phone ringing and I hang up, and at the end, taking maybe the first ever recorded on video "selfie." Actually showing the video of my cat gave me a chance to take a little break.


In the video, you also introduced your stuffed dog Pluto, do you still have him ?

Yes, Pluto is still with me, though in a plastic bag, in the closet.  He's a little worse for wear, you might say. But thanks for asking.

In some interviews, you talked about other ideas of videos of the same type, like "rent-a-mom", etc. Why weren't they made ?
And did you plan to make a sequel to Rent-a-friend, with your character of Sam ?

No other videos were made in the "series" because there was no money for them.  I did make one single audio tape, custom-made for a viewer who paid for it.  I recorded on the bus to work, and at the office.  No copy of it, unfortunately.


How did you react when you learned that Joe Pickett and Nick Prueher from the Found footage festival discovered your video and were showing it to audiences ?
Have they ever invited you as a guest in any of their shows ?

I was utterly thrilled to be invited to be part of their show. I actually read about FFF in the newspaper and went to see a show.  I realized at once that they needed to see RAF, so I spoke to them after the show.  Joe and Nick expressed interest and asked me to send them a copy and I did.  That was it.  The next time they came to Chicago we shot a video interview with them and I was invited to appear at the live show.  That totally knocked me out.  The applause their crowd gave me was probably the greatest ovation I've ever received — and had nothing to do with my identity as a former TV host in Chicago.  I really felt this was a completely different audience and much younger than the people who remember me from Wild Chicago.


When Joe and Nick introduced Rent-a-friend in their show, they said they would like to reunite you and Nancy, your friend from high school (like they did for John and Johnny, a duo from some home shopping videos), so I was actually a bit disappointed that it didn't happen for the interview you did for the DVD.
Do you know if Nancy ever saw Rent-a-friend ? Do you have any news from her ?

I have had no contact with Nancy since RAF became part of FFF.  I actually thought it over, contacting Nancy, and decided it best to leave it alone.  I don't think my wife would have appreciated me trying to connect with her.


In the interview on the DVD of Rent-a-friend, you said that you received letters from people after the release of your VHS, who really saw Sam as their friend. Did it also happen with the release of the DVD ? And has anyone ever sent you a videotape of them, like you suggested at the end of your video ?

I've never received a tape from anyone in response to that solicitation.


And finally, can you tell me about what you do these days, what are your current projects ?

I'm preparing a solo show featuring stories and songs I've written, performed by me. Working title: "How The Beatles Nearly Ruined My Life and David Bowie Saved It." 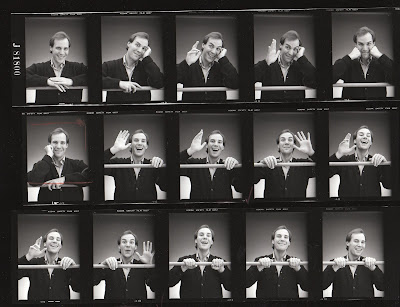